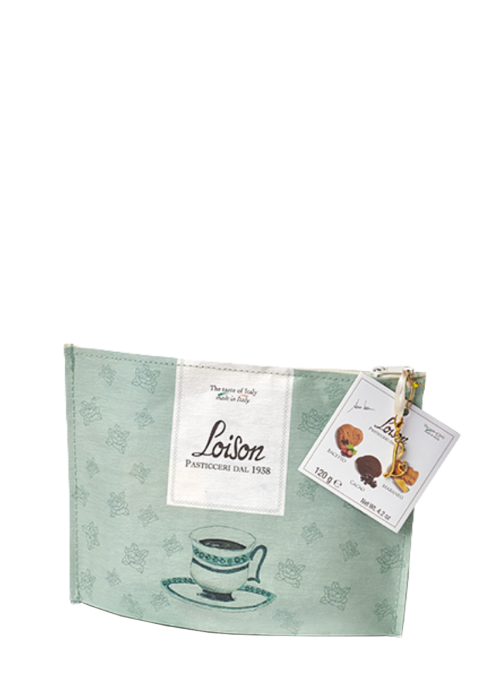 The Pochette Pasticceria Loison is a nice mix of biscuits from the renowned Loison pastry shop including Bacetto, Cacao and Maraneo. Selected raw materials that are transformed into pleasant aromas and entrancing flavors.

In 1938, when Tranquillo Loison opened his small bread bakery in Costabissara – a town on the outskirts of Vicenza - bread was a staple food for the majority of the population. However, the introduction of ration cards during World War II limited its distribution and consumption.
The end of the war and the improvement of the economy led to an increase in the demand for sweeter and tastier products. That is when Tranquillo began producing focacce with figs and raisins. His son Alessandro soon expanded the range of products adding spreads, wedding cakes and fresh pastries that he would deliver personally to local coffee shops and families. In 1955, Alessandro began specializing in the production and sales of Panettone and Pandoro cakes, yielding about 20-30 kilos a day. This new activity, together with the pastry line, was immediately much more profitable than selling bread alone, a product that was discontinued in 1960. In 1992, Alessandro's son Dario joined and eventually took over the company contributing to its international expansion as a symbol of what’s ‘Made in Italy’.

A chocolate-biscuit, which comes from a fine blend of cocoa and is completed thanks to the aromatic sweetness of honey.

From the Venetian countryside, a buttery shortbread with a grainy texture, thanks to
rustic yellow Marano corn flour.

Attention: The allergens in the ingredients are highlighted in bold.

By buying this product you can collect up to 5 loyalty points. Your cart will total 5 points that can be converted into a voucher of 0,05 €.