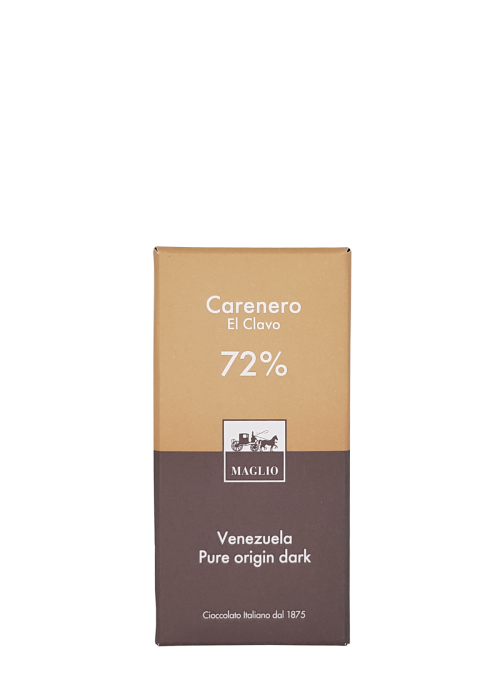 Mono origin is the line designed by Maglio to offer dark chocolate lovers the opportunity to savor and grasp the nuances of the best cocoa beans from plantations in various states. Carenero El Claro is the only one of the single origin bars to contain cocoa beans in grains.

In 1875 the Maglio arrived in Maglie (Le), where the company still resides. They were the talent and tenacity of Antonio, who opened a horseback inn, to lay the foundations of a brand that has been through the decades, modes, wars, and social changes. To follow the costumes of time, Giuseppe, son of Antonio, in the center of the city, opened a café with a lab of sweets. Dante's heir to such an enterprising father was Dante, who in the early twentieth century not only joined the main activity of banquets and receptions at home, but started producing handmade liquors. As for the many almond paste specialties, Dante found in chocolate, used for re-covering, a valuable ally to prolong its preservation. In the 1960s, his son Vincenzo found fertile ground for intensifying chocolate and pastry production: innovative spirit, invented recipes, enriched confectionery production and decided to identify the company with the trademark. At present, at the head of the Maglio group, there are Maurizio and Massimo, who have inherited an invaluable heritage of values ​​and knowledge and the responsibility to make Maglio live in the present and in the future in Italy and abroad.
In the state of Miranda (Venezuela), close to Caucagua area, grow up the an amazon amenolado together with "blanquito" ciorllo. Pedro's family run to cocoa plantation and thanks of his experience give to Carenero unique flavour: long tasting first aroma, fruity with flavour of cooffé, hazelnut and citrus fruit.

Attention: The allergens in the ingredients are highlighted in bold.

By buying this product you can collect up to 4 loyalty points. Your cart will total 4 points that can be converted into a voucher of 0,04 €.